Angewandte Chemie highlights a work from the CiQUS as ‘Hot Paper’ (a selection of special scientific importance articles by publishers), in which a new method of inorganic anions recognition is described by using cyclic peptides.

Ions are atoms or molecules with an electrical charge, a property due to the fact of having a different number of electrons and protons in its structure; if its electric charge is positive they are known as cations, while the anions are characterized by a negative electric charge. 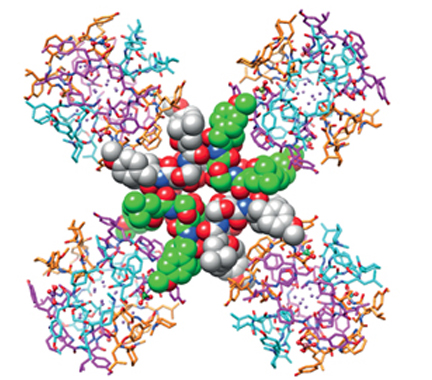 The ions are very common molecules in nature, since many biological processes are regulated by ions: molecules like DNA and RNA, the nucleic acids that store and transmit the genetic information, are nothing more than long anionic polymers with a high negative charge.

There are other types of inorganic anions in extracellular fluids such as chloride, carbonate or phosphate, whose deregulation is associated with diseases such as cystic fibrosis or bone mineralization; for this reason, scientists try to overcome these disorders through the development of systems that allow firstly the selective recognition of a particular type of ion, in order to subsequently transport it to the interior cell, with the aim to control the flow of ions and its concentration.

The Angewandte Chemie journal, one with the highest impact in the chemistry field in the world, has selected as Hot Paper a study conducted by CiQUS´s researchers that describe a novel recognition process of inorganic anions such as chlorides or carbonates, using small cyclic peptides.

This process occurs as a result of the union of both components (anions and cyclic peptides), which are associated forming nanospheres with novel properties; the anions are integrated into the structure of these nanospheres, which can move efficiently through the cell membranes facilitating the ion transport.

Moreover, the peptide character of these spheres and their reversibility formation make them very attractive for biological applications such as those where is necessary the anion regulation.

This work was carried out by CiQUS´s researchers Nuria Rodríguez Vázquez and Dr. Manuel Amorín, in collaboration with Dr. Ignacio Alfonso (IQAC-CSIC), and it was coordinated by the USC Professor Juan Granja, Principal Investigator in the CiQUS. 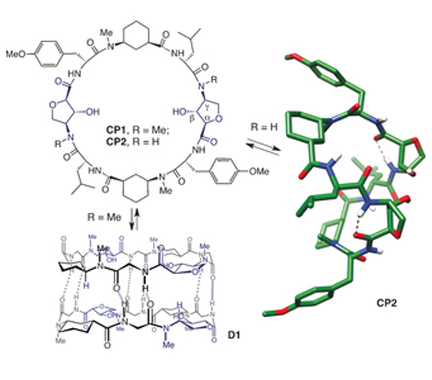 A cyclic octapeptide has been shown to fold into a “V-shaped” conformation that allows the selective recognition of anions such as chloride, nitrate, and carbonate. The selective anion recognition process involves the simultaneous assembly of six cyclic peptide subunits and four anions to give a supramolecular cluster that efficiently facilitates transmembrane transport of the anions.